Richardson conjures her voices Going On

Halifax actor and writer Elizabeth Richardson takes you back to the essentials of storytelling in her one-woman show Going On.

You could be sitting around a fire alone with her but even in the theatre the experience is a deliciously private and meditative one.

Richardson transfixes her audience by doing multiple, convincing and entertaining voices of her characters, from Peter O’Toole to her own worried mother to her mother’s cluck-clucking friends responding to news that Liz isn’t acting anymore.

Richardson’s story — a quest for self-knowledge and meaning in life — flows quickly and comically in two twinned stories. She cuts between being on the road as a young actress in the late seventies in a theatre company starring Peter O’Toole and being on a Buddhist retreat in Cape Breton in later later.

Both stories involve a search. The young actress is an understudy rehearsing alone in her hotel room waiting for her big break. The older Liz in Cape Breton is not exactly sure what she’s looking for. In fact, she gets intensely mad and bitter at being trapped in the retreat which is very funny, and human.

The structure of Going On is beautifully poetic and clear; the scenes from Anton Chekhov’s Uncle Vanya and Noel Coward’s Present Laughter that the young Liz does, sometimes with Peter O’Toole, are beautifully relevant to themes of aging and purpose.

Richardson ends her show on a precise, rewarding note that ties everything together.

Richardson is blessed with direction from Linda Moore for an exact rhythm, and with a lighting design by Leigh Ann Vardy that shifts mood and place within the set’s simple chair and kneeling cushion on a carpet.

I must say the character of the mother seems so real that her voice endures.

Going On, receiving its Canadian premiere, runs today, 7 p.m., at Eastern Front Theatre’s SuperNova Festival at the Neptune Studio Theatre. Other shows on the festival’s last day are: This is Cancer, 2 p.m.; I, Animal, 4 p.m., and Fishing, 9 p.m. 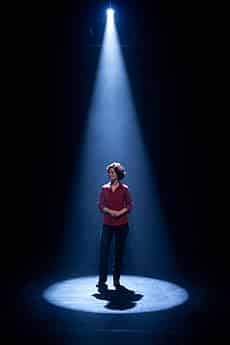 Elizabeth Richardson’s extraordinary and powerful performance in “Going On” is matched only by her brilliant writing.

It is touching and funny and insightful.